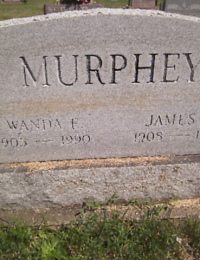 During the Second World War, James Murphey was serving in the U.S. Army in the Pacific theater of war as an M.P. (Military Policeman). One of his responsibilities was to keep watch over captured Japanese prisoners of war.

He told me this story (more than once) when I was young:.

"The MPs would share a tent in bivouac and were never stationary for too long. One night, he was sleeping restlessly and arose to see an escaped POW in the tent that he shared with other MPs. Jim kept a loaded 45 caliber semi-automatic pistol under his bed rest every night as I'm sure many others if not all others did, and out of reflex shot the Jap dead in the tent in the middle of the night."